A how to for wet replay when digitising degraded audio tape for preservation. - DAMsmart

After my previous post, Tips and tricks for recovering your oral history and sound collections from magnetic audio tape, I wanted to share an interesting experience from a couple of recent projects where we encountered an unusual form of degradation.

Recently, a large batch of 3M/Scotch 175 audio tapes arrived from a client to be digitised. Nearly all of the tapes presented with screeching and squealing on fast-wind/rewind. Coincidentally, we also had a few tapes of the same format from a second client, which were presenting with the same problem. Our initial approach was to bake the media, however, after running a couple of sample tapes through this process we saw little playback improvement.

After some research, we discovered that this tape type frequently exhibits this problem, but that it is not the commonly seen Sticky Shed Syndrome. Richard Hess discusses the problem in an ARSC article, where he uses the term “Soft Binder Syndrome” to describe magnetic recording tape that exhibit squealing, but not as a result of “Loss of Lubricant” or “Sticky Shed Syndrome”, and therefore do not respond to baking. In this article, Hess describes a “cold replay” system, whereby the tapes are played in a cold environment (a domestic refrigerator!), allowing squeal-free replay. Scientific details are available in the paper, but as a summary, the tape backing degrades in such a way that it transitions from a smooth material to a sticky one at a much lower temperature than is normal. Once this transition point falls below room/ambient temperature, the tape will stick when played normally, while playing tapes in an environment that is cooler than their transition point will give smooth replay.

Armed with this new information, we attempted cold replay on a few tapes from the two collections and had a moderate success rate. It is possible the failed tapes had degraded to a point where even the refrigerated temperature was too high, or that our setup needed some refining, but either way we decided to seek alternatives.

On Hess’s website there is an article outlining a “Wet Replay” system, pioneered by Marie O’Connell, where isopropyl alcohol is applied to the tape immediately before passing over the heads, in order to temporarily lubricate the tape. O’Connell’s system was quite complex and involved major modifications to the replay machine, as she was working on a very large collection.

Given that we could not get an appropriate result any other way, we decided to replicate the process used by O’Connell. After consulting our clients and getting the ok, we set out to construct a suitable system based on O’Connell’s design to allow us to digitise these tapes on our Studer A810. The process required careful balancing of minor screeches and high frequency response. As the audio tapes were played, isopropyl alcohol was applied to the recording surface. The more alcohol applied, the less the tapes screeched, but the increased head/tape gap also reduced high frequency response.

Overall, we were extremely pleased with the audio content recovered from the digitisation process. It highlights the importance of using best-practice approaches as well as taking a pragmatic approach to recovery and preservation, while trying new methods to give content owners the best results for their collection. As always, it was great to be part of a project that recovered 100% of the content for a culturally significant collection. 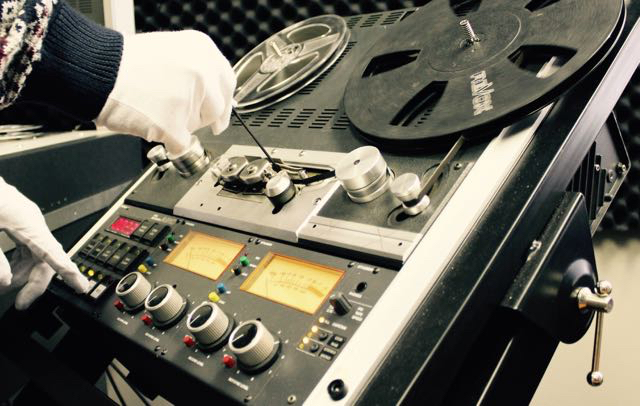 Special thanks should be made to Richard Hess, who has maintained an online database of tape types and their degradation characteristics, which helped us to identify and treat the problems with this particular collection.